Seeing in the first month, part 1 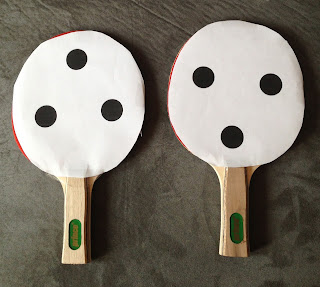 
M just had her one-month birthday. As a reader of papers on early cognitive development, I'm used to thinking that babies like M are all "newborns" - an unexamined category that includes at least the first month and perhaps beyond. But it turns out a tremendous amount has changed in that short month... in these two posts, I'll talk about a few things about M's visual perception that have been changing.

Parents of newborns are routinely told that their baby can only focus on objects 8 - 15 inches away. But this turns out not to be true. Research by Tony Norcia and colleagues (nicely summarized here) suggests that infants' visual acuity is considerably sharper than initially thought. Early research by Fantz and others used infants' visual preference for contrast to test their acuity: if they would attend to stripes with spatial frequency X then they must be able to perceive spatial frequency X.

This work was incredibly clever, but it required infants not only to be able to see the stimulus but also to have a preference for it and to direct their eyes to it consistently. Neither consistent preference nor sustained attention are newborns' strong suit, however. As a consequence, this work significantly underestimated their acuity. In fact, Norcia and colleagues estimate newborns' acuity to be closer to 20/120 in the first month, using passive brain measures that only require perception, not preference or attention. So newborns' acuity isn't great, but at least they aren't legally blind.

Adults' eyes are constantly in motion, making saccades directly from from one location to another around two to four times per second. Infants' ability to make fast saccades matures rapidly, although
early researchers observed that very young infants sometimes make what look like tiny "microsaccades" along the way to a target, rather than jumping there directly.

My little experiment with M has been to hold her up at arm's length facing me. Once she's there I get her attention and move her about 20 or 30 degrees to the right, and then to the left, observing whether her eyes follow my face. In the first week or so I saw a lot of these little tracking microsaccades. But by around 14 days she would make a single tracking saccade to fixate my face again after I moved her. These saccades took quite a while to plan and execute: I didn't time them but it seemed like it took a solid 500 - 1000 ms to look at me. This was really striking: Move. Pause. Look.

Now at a month old, I can do the same trick when M is in her chair and I'm three or four feet away from her. And she already seems quite a bit faster - though still far from the instantaneous adjustment I'd expect even a few months down the road.

A preference for contrast

Even in the first week we noticed that M seemed to love the venetian blinds above her changing table. Her preference is likely driven by a preference for high contrast. The blinds are spaced pretty far apart, so the spatial frequency is low and the contrast is high because of the light behind them. I had talked about this phenomenon in a paper on babies' visual preferences, but it's amazing to see in person. By 4 weeks, when she's fussy, we can calm her down by holding her a couple of feet from the blinds in our dining room.

Although my saccade tracking exercise above happens to involve a saccade to a face, it doesn't necessarily say anything about face preferences per se. In that situation, my face is also a high-contrast target on a boring background (usually the ceiling). At one point I tried to show M's new trick to my wife and inadvertently set M up in a situation where there was a lightbulb behind me. I moved her to the left, and she stared at the lightbulb. I moved her to the right and she made a saccade to keep looking at the lightbulb (completely missing me). Maybe I should paint stripes on my face.

A preference for faces

If M would rather look at a lightbulb than her dad, does she really have a preference for faces? It turns out she does. Although their face preference may not trump their love of blinds, infants still prefer to look at things that look more like faces than contrast-matched things that don't. To test this finding with M, I used an adapted version of the classic Johnson & Morton (1991) paper on newborn face preferences.

I constructed a pair of ping pong paddles, as in the picture above, with a set of three dots comprising either a pyramid (a schematic face) or an upside down pyramid (which doesn't look like a face).  For each trial, I got M's attention, crouched behind her bassinet, and held a paddle about a foot away from her face. I timed how long she looked at the paddle before looking away for more than 2 seconds. (All timing was inexact because I was using an iPhone timer. Trials shorter than 5s I called a false start and restarted.)

I ran this procedure twice, when M was 13 and 15 days old. The first time I showed a non-face and then a face; the second time I showed a face and then a non-face. I tried to remain blind to condition by randomly numbering the backs of the paddles before each session, but I didn't completely succeed - so I take the results with a grain of salt. Nevertheless, M's data were striking. In the first session she looked at the non-face for 28 seconds and the face for 78 seconds; in the second she looked at the face for 46 seconds and then the non-face for 25 seconds. These results look almost identical to the visual preference reported by Farroni et al. (2005) using the same stimulus. Cool!

A lot has changed over the past month. It's been remarkable to see M becoming a more awake, aware, perceptive baby. In the second post in this series, I'll talk a bit about her growing ability to use her arms, as well as the way she scans within faces.
Posted by Michael Frank at 10:05 AM