(This post is joint with Rose Schneider, lab manager in the Language and Cognition Lab.)

For toddlers, the ability to communicate using words is an incredibly important part of learning to make their way in the world. A friend's mother tells a story that probably resonates with a lot of parents. After getting more and more frustrated trying to figure out why her son was insistently pointing at the pantry, she almost cried when he looked straight at her and said, “cookie!” She was so grateful for the clear communication that she gave him as many cookies as he wanted.

We're interested in early word learning as a way to look into the emergence of language more broadly. What does it take to learn a word? And why is there so much variability in the emergence of children's language, given that nearly all kids end up with typical language skills later in childhood?

One way into these questions is to ask about the content of children's first words. Several studies have looked at early vocabulary (e.g. this nice one that compares across cultures), but – to our knowledge – there is not a lot of systematic data on children's absolute first word.* The first word is both a milestone for parents and caregivers and also an interesting window into the things that very young children want to (and are able to) talk about.

To take a look at this issue, we partnered with Children’s Discovery Museum of San Jose to do a retrospective survey of children's first word. We're very pleased that they were interested in supporting this kind of developmental research and were willing to send our survey out to their members! In the survey, we were especially interested in content words, rather than names for people, so for this study, we omitted "mama" and "dada" and their equivalents. (There are lots of reasons why parents might want these particular words to get produced – and to spot them in babble even when they aren't being used meaningfully).

We put together a very short online questionnaire and asked about the child's first word, the situation it occurred in, the age of the child, the age of the utterance, and the child's current age and gender. The survey generated around 500 responses, and we preprocessed the data by translating words into English (when we had a translation available) and categorizing the words by the MacArthur-Bates Communicative Development Inventory (CDI) classification, a common way to group children's vocabulary into basic categories. We did our data analysis in R using ggplot2, reshape2, and ddply.

Here's the graphic we produced for CDM: 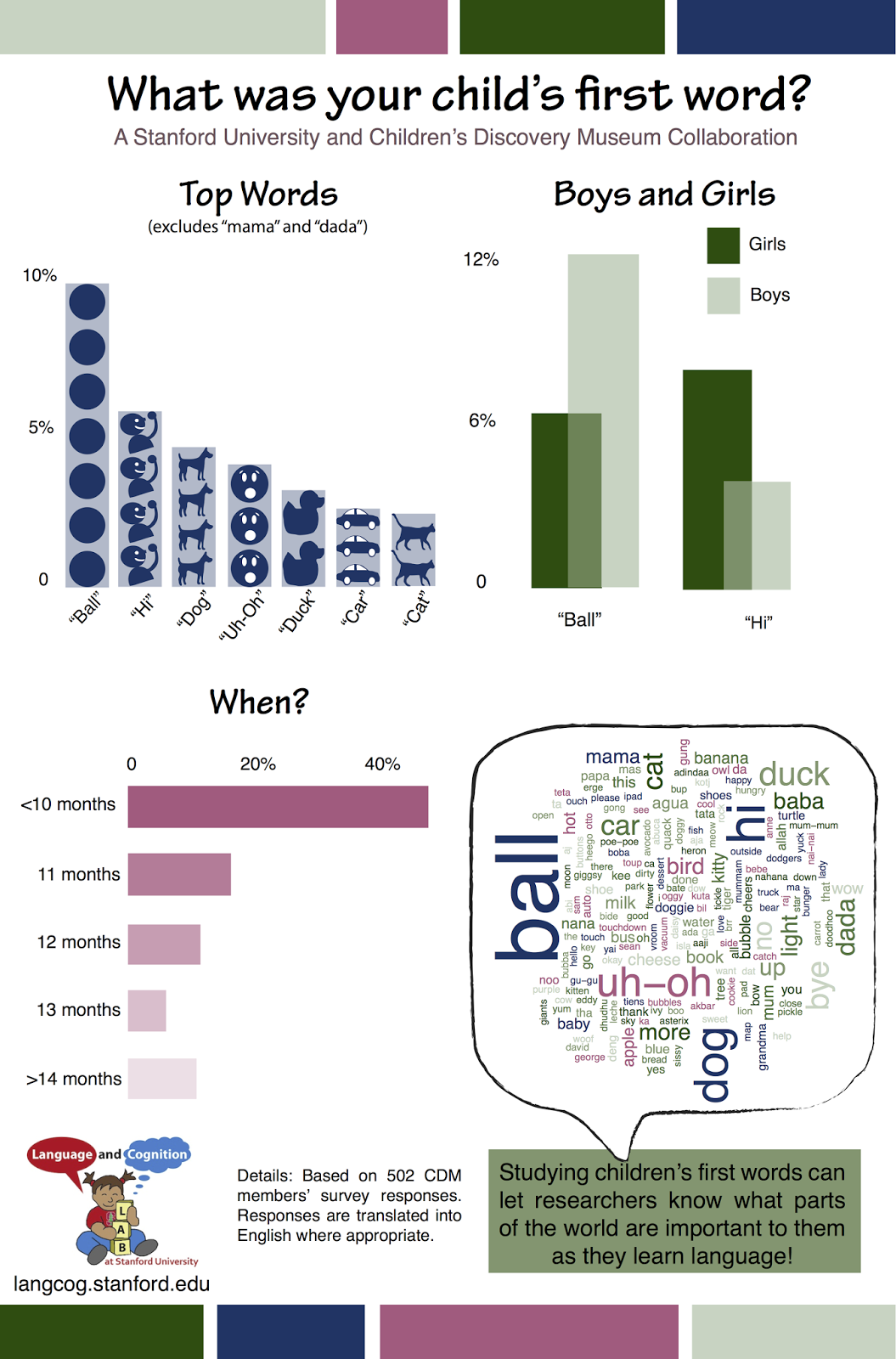 We were struck by a couple of features of the data, and the goal of this post is to talk a bit more about these, as well as some of other things that didn't fit in the graphic.

First, the distribution of words seemed pretty reasonable, with short, common words for objects ("ball," "car"), animals ("dog," "duck" – presumably from bathtime), and social routines ("hi"). The gender difference between "ball" and "hi" was also striking, reflecting some gender stereotypes – and some data – about girls' greater social orientation in infancy. Of course, we can't say anything about the source of such differences from these data!

Another interesting feature of the data was the age distribution we observed. On parent report forms like the CDI, parents often report that their children understand many words even in infancy, with the 75th percentile being reported to know 50 words at 8 months. While there is some empirical evidence for word knowledge before the first birthday, this 50 word number has always been surprising, and no one really knows how much wishful thinking it includes. The production numbers for the CDI are much lower, but still have a median value above zero for 10-month-olds. So is this overestimation? Probably depends on your standards. M, Mike's daughter, had something "word-like" at 10 months, but is only now producing "hi" as a 12-month-old (typical girl).

One possible confound in this reporting would be parents misremembering the age at which their child first produced a word, perhaps reporting systematically younger or older ages (or even ages rounded more towards the first birthday) as the first word recedes into the past. We didn't find evidence of this, however. The distribution of reported age of first word was the same regardless of how old the child was at the time of reporting: 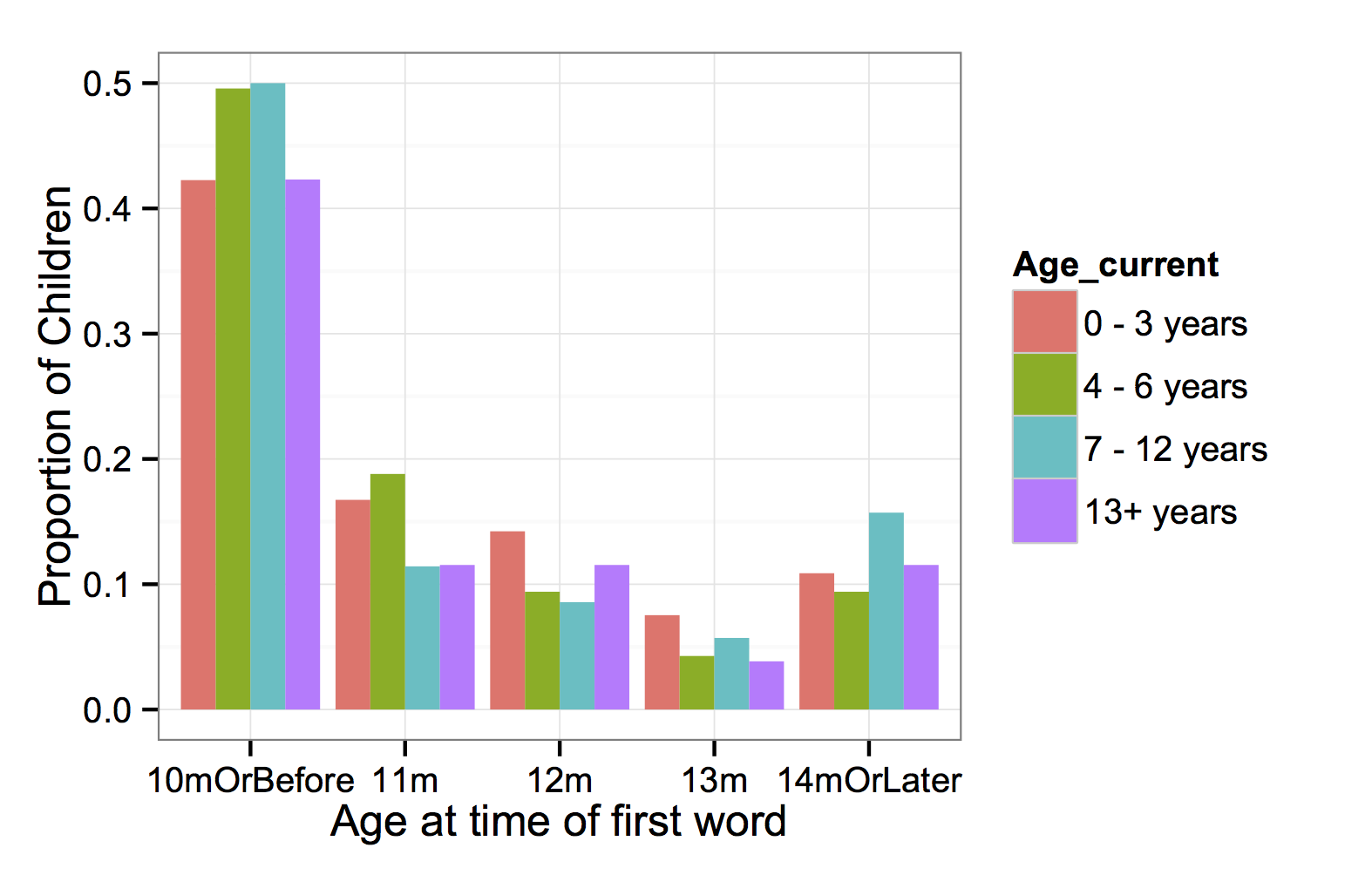 Now on to some substantive analyses that didn't make it into the graphic. Grouping our responses into broad categories is a good way to explore what classes of objects, actions, etc., were the referents of first words. While many of the words we observed in parents’ responses were on the CDI, we had to classify some others ad-hoc, and still others we were unable to classify (we ended up excluding about 50 for a total sample of 454, 42% female). Here's a graph of the proportions in each category: 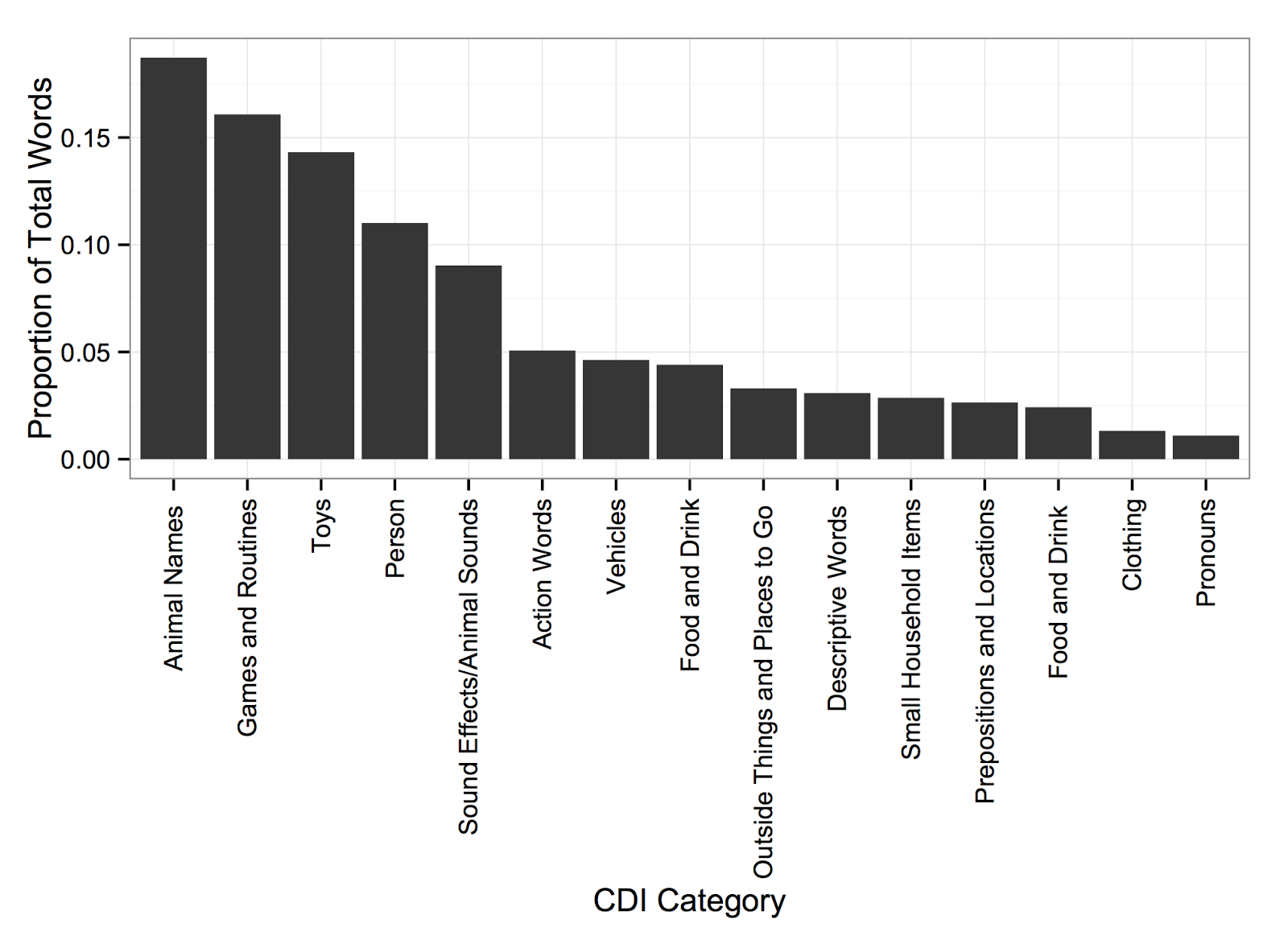 So no individual animal name dominated, but overall they were most frequent, followed by "games and routines" (including social routines like "hi" and "bye") and toys. People were next, followed by animal sounds.


There are some interesting ways to break this down further. Note that girls generally are a few months ahead, language-wise, so analyses of age and gender are a bit confounded. Here's our age distribution broken down by gender: 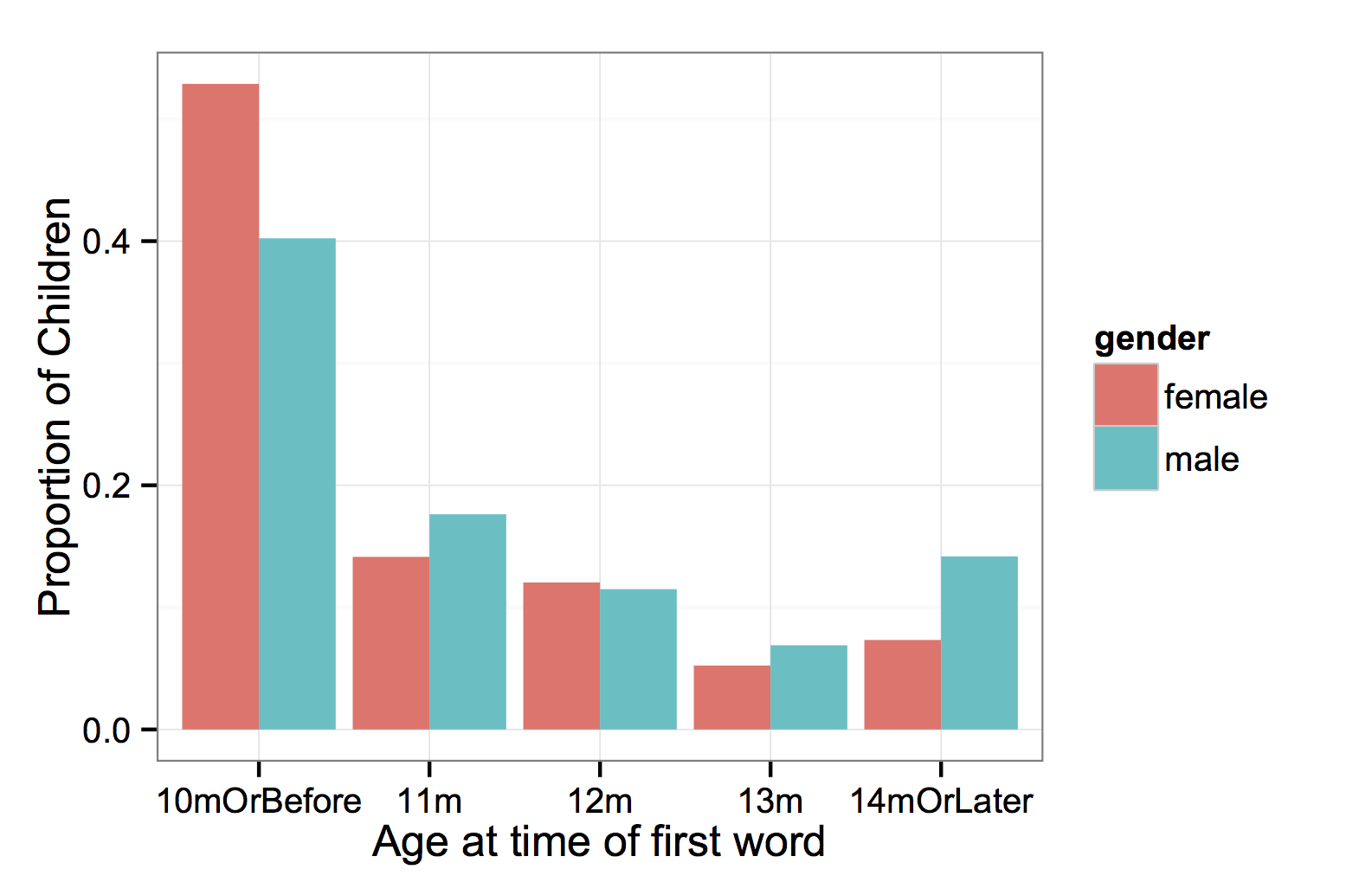 That said, here are the splits by age: 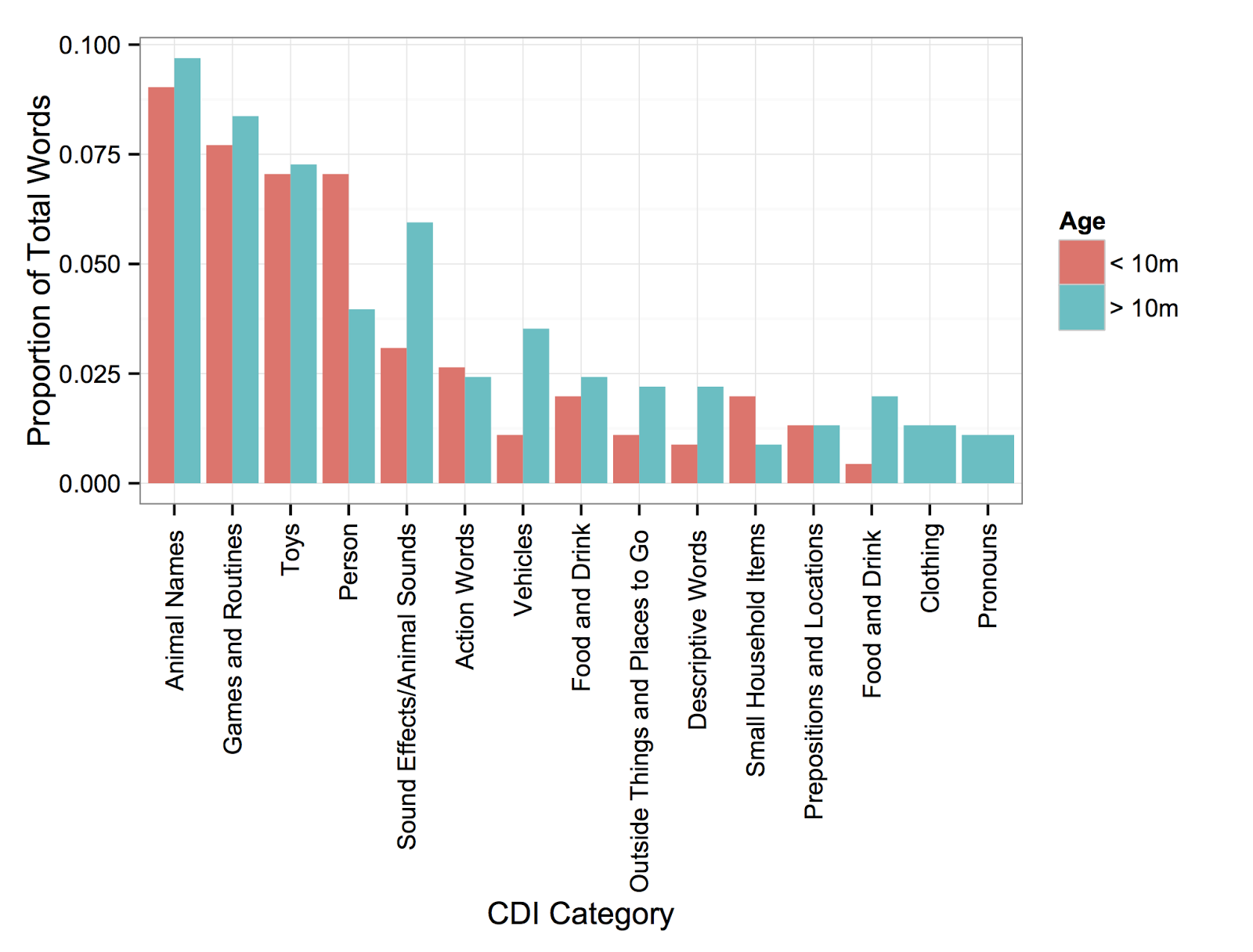 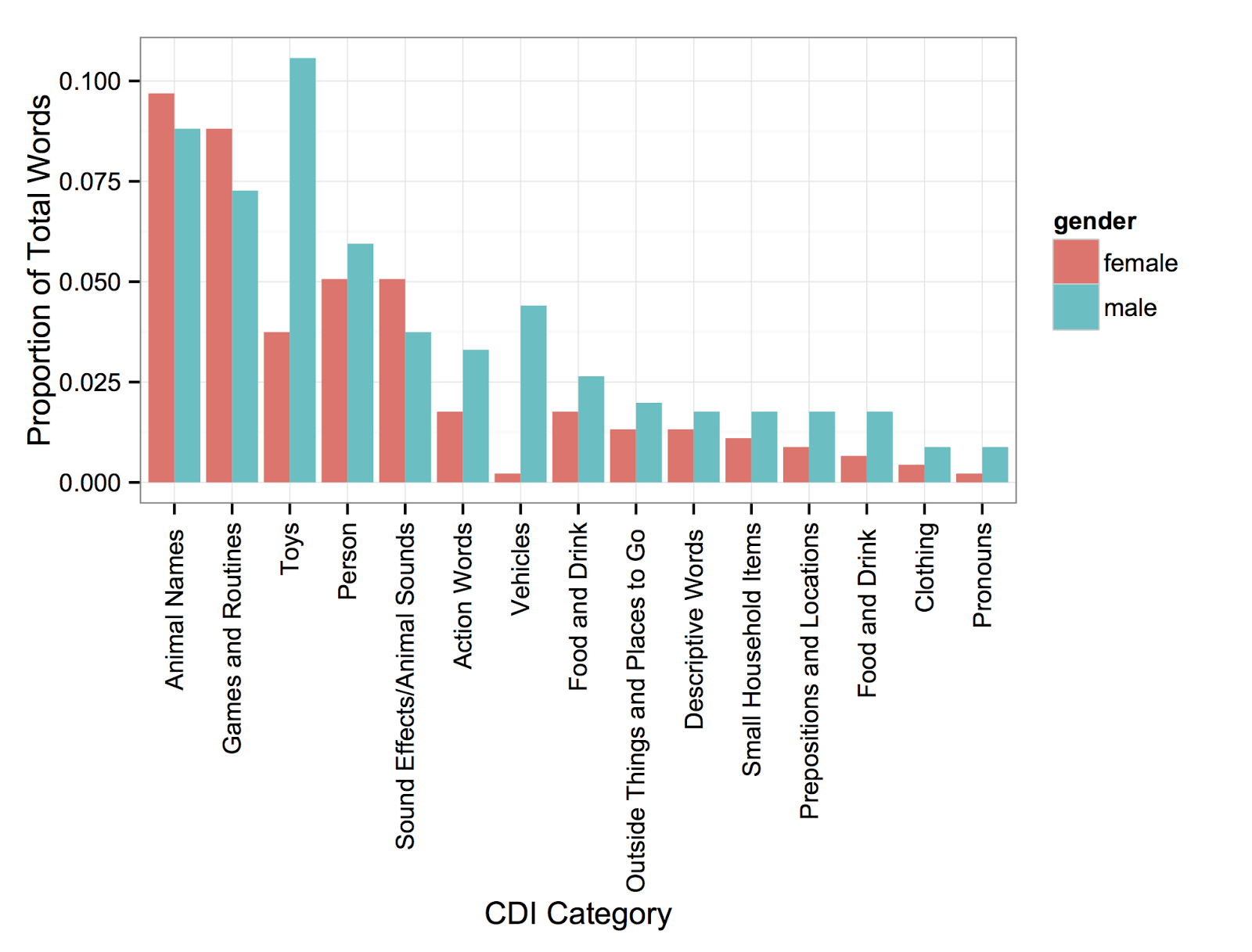 Overall, younger kids are similar to older kids, but are producing more names for people. Older kids were producing slightly more vehicle names and sounds, but this may be because the older kids skew more male (see gender graph, where vehicles are almost exclusively the provenance of male babies). The only big gender trends were 1) a preference for toys and action words for the males and 2) a general broader spread across different categories. This second trend could be a function of boys' tendency to have more idiosyncratic interests (in childhood at least, perhaps beyond).

Overall, these data give us a new way to look at early vocabulary, not at the shape of semantic networks within a single child, but at the variability of first words across a large population. We invite you to look at the data if you are interested!

---
Thanks very much to Jenni Martin at CDM for her support of our research!

* What does that even mean? Is a word a word if no one understands or recognizes it? That seems pretty philosophically deep, but hard to assess empirically. We'll go with the first word that someone else, usually a parent, recognized as being part of communicating (or trying to communicate).

Posted by Michael Frank at 9:21 AM