In David Marr's pioneering book, Vision, he proposed that no single analysis provides a complete understanding of an information processing device. Instead, you really need to have a theory at three different levels, answering three different sets of questions; only together do these three analyses constitute a full understanding. Here's his summary of the three levels of analysis that he proposed: 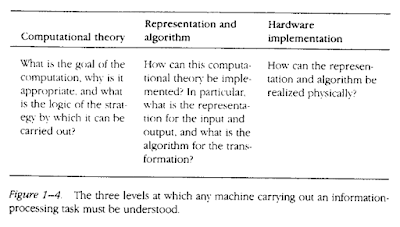 Since 1982 when the book came out, this framework has been extremely influential in cognitive science, but it has also spurred substantial debate. One reason these debates have been especially noticeable lately is due to the increasing popularity of Bayesian approaches to cognitive science, which are often posed as analyses at the computational theory level. Critiques of Bayesian approaches (e.g., Jones & Love; Bowers & Davis; Endress; Marcus & Davies) often take implicit or explicit aim at computational theory analyses, claiming that they neglect critical psychological facts and that analyses at only the computational level run the risk of being unconstrained "just so" stories.*

In a recent special issue of Topics in Cognitive Science, a wide variety of commentators re-examined the notion of levels of analysis. The papers range from questioning of the utility of separate levels all the way to proposals of new, intermediate levels. Folks in my lab were very interested in the topic, so we split up the papers amongst us and each read one, with everyone reading this nice exposition by Bechtel & Shagrir.  The papers vary widely, and I haven't read all of them. That said, the lab meeting discussion was really interesting and so I thought I would summarize three points from it that made contact with several of the articles.

1. The role of iteration between levels in the practice of research.

Something that felt missing from a lot of the articles we read was a sense of the actual practice of science. There was a lot of talk about the independence of levels of analysis or the need for other levels (e.g., in rational process models). But something I didn't see at all in the articles we discussed was any notion of how these philosophical stances would interact with the day-to-day practice of science. In my own work, I often iterate between hypotheses about cognitive constraints (e.g., memory and attention) and the actual structure of the information processing mechanisms I'm interested in. If I predict a particular effect and then I don't observe it, I often wonder if my task was too demanding cognitively. I'll then try to test that question by removing some sort of memory demand.

An example of this strategy comes from a paper I wrote a couple of years ago. I had noticed several important "failures" in artificial language learning experiments and wondered the extent to which these should be taken as revealing hard limits on our learning abilities, or whether they were basically just results of softer memory constraints. So I tried to reproduce the same learning problems in contexts with more limited constraints, e.g. by giving participants unlimited access to the stimulus materials in an audio loop or even a list of sentences written on index cards. For some problems, this manipulation was all it took to raise performance to ceiling level. But other problems were still fairly difficult for many learners even when they could see all the materials laid out in front of them! This set of findings then allowed me to distinguish which phenomena were a product of memory demands and which might constrain the representation or computation beyond those processing limitations.**

2. The differences between rational analysis and computational level analysis.

I'm a strong proponent of the view that a computational level analysis that uses normative or optimal (e.g. Bayesian) inference tools doesn't have to imply that the agent is optimal. In a debate a couple of years ago about an infant learning model I made, I tried to separate the baggage of rational analysis from the useful tools that come from the computational level examination of the task that the agent faces. The article was called "throwing out the Bayesian baby with the optimal bathwater," and it still summarizes my position on the topic pretty well. But I didn't see this distinction between rational analysis and computational level analysis being made consistently in the special issue articles I looked at.

I generally worry that critiques of the computational level tend to end up leveling arguments against rational analysis instead, because of its stronger optimality assumptions. In contrast, the ideal observer framework – which is used much more in perception studies – is a way of posing computational level analyses that doesn't presuppose that the actual observer is ideal. Rather, the ideal observer is a model that is created to make ideal use of the available information; the output of this model can then be compared to the empirical data, and its assumptions can be rejected when they do not fit performance. I really like the statement of this position that's given in this textbook chapter by William Geisler.

3. The question of why representation should be grouped with algorithm.

I had never really thought about this before, perhaps because it'd been a while since I went back to Marr. Marr calls level 2 "representation and algorithm." If we reflect on the modern practice of probabilistic cognitive modeling, that label doesn't work at all – we almost always describe the goal of computational level analysis as discovering the representation. Consider Kemp & Tenenbaum's "discovery of structural form" – this paper is a beautiful example of representation-finding, and is definitely posed at the highest level of analysis.

Maybe here's one way to think about this issue: Marr's idea of representation in level 2 was that the scientist took for granted that many representations of a stimulus were possible and was interested in the particular type that best explained human performance. In contrast, in a lot of the hard problems that probabilistic cognitive models get applied to – physical simulation, social goal inference, language comprehension, etc. – the challenge is to design any representation that in principle has the expressivity to capture the problem space. And that's really a question of understanding what the problem is that's being solved, which is after all the primary goal of computational level analysis on Marr's account.

My own take on Marr's level's is much more pragmatic than the majority of authors in the special issue. I tend to see the levels as a guide for different approaches, perhaps more like Dennett's stances than like true ontological distinctions. An investigator can try on whichever one seems like it will give the most leverage on the problem at hand, and swapping or discarding a level in a particular case doesn't require reconsidering your ideological commitments. From that perspective, it has always seemed rather odd or shortsighted for people to critique someone on the level of analysis they are interested in at the moment. A more useful move is just to point out a phenomenon that their theorizing doesn't explain...

---
* Of course, we also have plenty of responses to these critiques....
** I'm painfully aware that this discussion presupposes that there is some distinction between storage and computation, but that's a topic for another day perhaps.