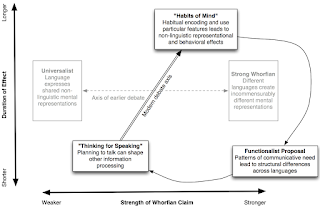 In my course, we've spent the quarter reading about cross-linguistic differences in cognitive domains like space, time, number, and color. In each case, we've tried to assess the state of the evidence, walking through a series of questions:
Getting beyond the simple correlation between "people in place X are different from people in place Y" is one of the trickiest parts of this literature. In some domains, causal intervention methods like verbal interference are the accepted standard, while others are still stuck at the descriptive or correlational stage.

As we've read, I've been struck by the evolution of theoretical options in the language/thought space. Yet I haven't seen this space described in any of our readings -- hence this post and the diagram above. Roughly speaking, the change is a shift in the axes of the debate. The older literature on Whorfian effects tends to focus on the question of whether non-linguistic mental representations are created by (or at least modulated by) language (the left-right dimension). In contrast, newer literature tends to treat some kind of cross-linguistic difference as a given. Instead it investigates both the size of this effect and its timescale (the up-down dimension). The result is a diagonal.

The weaker pole of this new axis (lower left) is anchored by the idea that linguistic effects on cognition are "momentary" and due to the explicit use of language for information encoding or communication. An influential version of this view comes from Dan Slobin's idea of "thinking for speaking" – that much thought actually occurs in the context of planning for communication, and it's precisely these contexts that lead to the biggest differences in cognition across speakers of different languages. This view is also deeply related to the "cognitive technology" hypothesis that I proposed – that language is used in the moment as a tool to facilitate the storage and manipulation of information.

Number and color, the two domains that I've worked on most closely, seem to me to be the cases where this view is most strongly supported. In the case of color, 1) verbal interference pretty clearly removes cross-linguistic differences in color tasks (suggesting that language has its causal effect at the time of encoding), and 2) there are no differences in discrimination accuracy in pure perceptual tasks. In the case of number, similarly, verbal interference decreases use of exact numerical representations. In addition, cultural exposure to number concepts is not enough to help people succeed on number tasks – they really need access to the linguistic device (the count list). In both of these cases, cognition appears to be affected by language in the moment.

The more-extreme (more strongly Whorfian) axis, in turn, is tied to the idea of "habits of mind." This idea is that habitually speaking about the world in a particular language attunes us to the dimensions that are typically marked in that language. Then these dimensions remain salient even when we are not planning to speak about them. One case that may follow this pattern is spatial language. In one well-studied case, Pormpuraaw speakers must obligatorily mark absolute cardinal directions like north and south in their communication. This habit appears to help them track cardinal directions accurately and also leads them to use cardinal directions consistently even when they're thinking about time instead of space. A second domain that could in principle act this way would be grammatical gender, in which objects might be habitually considered masculine or feminine because of their linguistic markings, though as far as I know the evidence there is weaker.

Finally, in addition to this reorientation of the theoretical landscape, a prominent trend in recent years has been to look for functional explanations of cross-linguistic differences. These are represented – perhaps somewhat sloppily – by the returning connection from "habits" to "thinking for speaking" in my diagram, and related to the second question posed in the Whorf quote above:


Are there traceable affinities between (a) cultural and behavioral norms and (b) large-scale linguistic patterns? (Whorf, 1941)

On functionalist accounts, both our general cognitive/perceptual architecture and the communicative needs in our community can lead to linguistic change. This causal direction has been argued for both color and lightness, and has been advocated more broadly as a view of language change (even influencing words for snow).

It's often easy to see Whorfian debates as a never-ending back and forth, but that's pretty clearly not the case here. There has been major methodological and empirical progress within individual domains, but the theoretical landscape has shifted considerably as well. Rather than asking whether language affects thought, we are increasingly asking both "how" – and "for how long."
Posted by Michael Frank at 3:07 PM