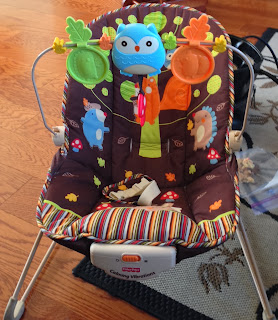 We've just returned from a trip to see family, in honor of my daughter M's two month birthday, and something very amazing has happened. M has discovered objects.

M has been completely fascinated by faces almost since the beginning of her life (see a previous post on this). She is incredibly social, tracking everyone around her, making eye contact* and smiling. And along with that social fascination came a complete indifference to objects. She couldn't - and still can't -hold onto anything that isn't tightly pressed into her palm (activating the palmar reflex). But it was more than that. She just didn't seem to care if we moved a toy near her. We could maybe get a little rise out of her with a rattle, but any face was enough to provoke her to track attentively.

We noticed a huge change this morning. We put M in her bouncy chair (see photo above), and - just for kicks - snapped on the toy bar that comes with the chair. We had tried this earlier and gotten absolute disinterest from her. But this morning, she was in love! She sat and cooed and bounced for probably around 45 minutes, fixating the toys the whole time. There's a face on one of the toys, though (for extra perceptual oomph, perhaps?). So we repeated the experiment, this time with some non-face toys in her crib. Again, she was mesmerized.

Clearly this general phenomenon is something toy manufacturers know about - or else why would every baby crib or seat come with floating, bouncing toys above it (think the ubiquitous pack-'n-play)? But a shift to an interest in objects around 2 months is something that I haven't read about in the developmental literature. A very interesting sequence of papers documents a shift in attention to faces relative to objects a little later, e.g. around 4 months. In a new eye-tracking study, we reviewed this literature, concluding that


"The evidence on sustained attention to faces is thus consistent across studies: 3-month-olds do not prefer faces in either dynamic displays or static stimulus arrays, while older children [5 - 6 month-olds] show a clear face preference."

But these findings are all about whether faces trump objects when they are put in direct competition. I bet M would show the attention capture that babies in all of these studies show - they look at a salient object and then don't seem to be able to tear themselves away, even when the competitor is a face. What they don't capture is a growth of interest in objects per se, when there are no other competitors.

There are also a bunch of wonderful studies from Jessica Sommerville, Amy Needham, and collaborators examining growth in babies' perception of faces, objects, and intentions based on their abilities to reach and grab (e.g. this instant classic and this newer one). But M can't consistently reach for objects yet, and probably won't be able to for a while now. She also doesn't seem to be swiping for the toys on the bouncy chair. So I don't think the development of reaching is what's driving this change in visual interest.

I'd love to know if anyone has any ideas about whether this phenomenon - a dramatic increase in interest to objects - is something that has been studied before (or even if they've seen it in their own children). Regardless of mechanism, though, it's been a pleasure to watch M as she discovers a whole world of new things to see.

---
* Actually, as Haith, Bergman, & Moore (1977) noted, she did a lot of "forehead contact" early; now  that behavior has morphed into something that looks much more like true eye contact.
Posted by Michael Frank at 10:35 AM