The valence/arousal model, from Russell (1980). Higher up is more aroused, further right is more positive valence.

Watching my daughter M, who is now six weeks old, makes me think that valence and arousal are much more tightly coupled in young infants than in older children and adults. Let me explain what I mean.

The valence/arousal model is a simple, powerful way of thinking about the spectrum of human emotions. Valence describes whether the emotion is positive or negative, while arousal describes the level of alertness or energy involved in the emotion. The original scaling of emotion words is shown in the graphic above. For example, you can see that fear, anger, and distress are high arousal emotions with generally negative valence (upper left corner) while excitement and delight are generally high arousal emotions with positive valence (upper right corner).

In the last few weeks, M has been starting to smile and coo. This very cute behavior is happening mostly right after she wakes up. She will be awake and alert and very smiley, and I'll play with her, tickling her stomach or holding her hand. After a few minutes of this, though, she can very quickly cross the line into overstimulated and fussy. Her smile will turn into a frown almost instantaneously. This flip happens in the other direction as well: she can be starting to wail from hunger, and if I bounce her and talk to her for a minute she will suddenly smile at me (before remembering that she is hungry and scrunching up her face again). In other words, when she's aroused, she switches between positive and negative valence very quickly.

So perhaps M's dimensions of valence and arousal just aren't as well-differentiated. I tried to make my own version of Russell's diagram (below): 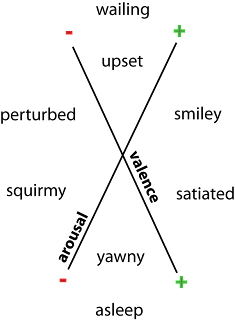 There's essentially just a single dimension of variance, which is mostly based on arousal: asleep being lowest and wailing being highest. Between this there is some variation on whether the middles states are generally positive (e.g. happy satiated look after eating) or negative (squirming and slightly uncomfortable), but they can flip between one another very quickly.

I've been trying to think about how to test this model, but I don't have any good ideas yet. Nevertheless, it certainly seems like it captures my intuitions about M's emotional states so far...