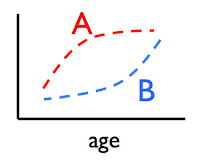 Studies that dissociate age and school shouldn't be too complicated to do, for either executive control or for other constructs. And these sorts of studies might give us some insights into the ways that (pre-) school experiences support the development and refinement of cognition. I recently heard the term "academic redshirting": holding children back from starting school so that they are older and do better than their peers when they finally start. This is a fairly intense (and controversial) strategy for getting kids ahead, but it might create an interesting natural opportunity for studying cognitive development...
Posted by Michael Frank at 11:11 AM